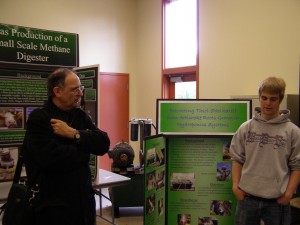 Ed’s background is as a biology teacher at Tillamook HS from 1995-2000 when the school was one of 25 national Annenburg Schools for science. He returned after a break in 2004 to become grant writer for the entire School District, and, using this wider influence and the $6m of grants he has secured, has been at the centre of a small revolution in science teaching in Tillamook which has been internationally recognised.

He says, ‘Its really about relationships. It’s a long-term process. It’s not ‘speed-dating’. It’s about how different classes interweave into the community.’ With the support of Bruce Rhodes, the THS Principal, Clair Thomas, the co-ordinator of the Natural Science Program since 2005, and staff like biology teacher Melissa Radcliffe and agriculture teacher Max Sherman, Ed has nurtured an approach to teaching and learning which is based on ‘citizen science’ – problem-solving within the immediate environment and local community. 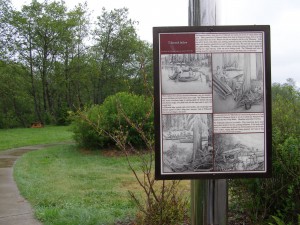 He takes me to Hoquarton Slough City Park, which staff and middle-school students have created from scratch on the site of an old lumber mill and city dump. It now boosts the local economy by providing canoeing opportunities on the adjoining river.

He tells the story of how some of the School District ‘at-risk’ kids are running the interpretative center on Hwy 6. ‘It’s a beautiful center. It would have shut down for the winter due to the Oregon budget situation but our kids kept it running – that was their project as a team. They are delivering educational programmes to adults from all over the State and really from all over the world…’

We visit South Prairie Elementary School, who have a large area of wild land next to the school and a small salmon hatchery which they use for environmental education.

But it is the High School Advanced Science program that impresses me most. Hayden, Tod and Christa, all 12th Graders about to graduate, describe some of their science projects, with the help of the professional-quality scientific posters they have produced using school equipment. Christa has extracted taxols (a group of chemicals used in cancer treatment) from artichoke roots grown in hydroponic systems. Tod has assessed the causes of and solutions to pollution in the creek running behind the school. He has just joined the local Watershed Council. He says, ‘It’s been a real eye-opener to me to be part of that. Basically what I’ve come to see is that people will change when they’re educated and made to understand why’. Hayden, a dairy farmer himself faced with high fuel prices, has extracted biodiesel from the invasive Scotch Broom. Other projects include investigating the salt tolerance of invasive New Zealand snails, extracting bioethanol from waste whey from Tillamook Creamery and using rods to grow diatoms used in biofuel production. The common theme of all these projects is that they work closely with local business and other local partners to identify and solve common local challenges.

The seniors make use of a science trailer, fitted out with the latest field science equipment, both for their own field work and when they themselves teach science at the local elementary schools. The school has an Advanced Science laboratory with University-level equipment which THS students use for their projects.

I chat with Melissa Radcliffe, whose approach to teaching and learning has helped to shape the school’s science programme. She says, ‘We are creating thoughtful people. When I look at my students I think of them in the context of future voters and future parents. Which means they have to be able to look at the world around them and make good decisions based on ‘the data’ that they have – to cut through the superfluous stuff and see the facts’. She believes in the importance of linking students to the place in which they live – ‘Place is really important. If you can get kids to bloom where they’re planted and take ownership of the area around, they’re going to be more likely to come back and be those good citizens that we need here in our communities. Giving them a sense of place, pride in where they’re from we have to tap into the resources that are here. We use the creamery, forestry areas, the local stream for water quality testing and restoration. That’s been an ongoing process. So by using the place in our stream as the living laboratory, they collect real data, do real analysis and know that they are going to present their findings to a local Watershed Council. So they go and present their findings, which means its real. So when we go out there they have to do it well.’

Click on the picture to get a close-up view of this student research project.

Max Sherman teaches Basic and Advanced Agriculture, Welding, and Plant Science (Biology). The facility includes a greenhouse, a small computer lab for research, classroom, and a large shop area. Max incorporates metal art, hydroponics, micro-propagation, genetic research, soil sampling, and a small tissue culture lab into his classes. He tries to integrate as many content areas into his classes as possible; students actively integrate agriculture with mathematics, art, photography, and English. Sherman prioritizes project-based work because he believes ‘it allows students to express themselves, have successes, and a chance for integration of the concepts.’ As a result of doing relevant projects, he says students see how they can apply their knowledge to their future.

Ed makes the point that this problem-based, hands-on approach encourages students who are not naturally academic to excel, and that it has improved results across all disciplines in the national standardised tests. Of the 40 or so students who have been involved in these projects in the last three years, 92% of them passed their math test, 100% passed straight science and 90% passed English, way above most High Schools, and bringing the Tillamook HS average to 60%.

This year alone Tillamook HS students have brought $230,000 worth of student scholarships to continue with their education. Tod and Hayden are heading for Oregon State University. In early June some of the school’s pupils are about to take their projects to Amsterdam to participate in the International Environment and Scientific Project Olympiad. Ed and Hayden are part of a small outreach team that communicates the work Tillamook School District is doing to 12 School Districts in the surrounding area. In fact Ed is on his way to Seattle for a two day presentation of Tillamook SD’s work.

The last word goes to Tod – ‘There is so much more to these projects – they have an economic angle and benefit the community and local industry. This way gives students something to have a passion and drive for. It takes them out of the textbook/classroom setting where you read the textbook, do the assignment and get the grade. This is something they’re passionate about. We’re passionate about an actual problem that we can take our knowledge and apply it and see actual results. This is a way for us to see right now the results and see how much education is important and what it can do.’

Becs Boyd is exploring place-based education programs throughout the Pacific Northwest through a Churchill fellowship. Her blog can be found at http://pbechurchillfellowship.blogspot.com/