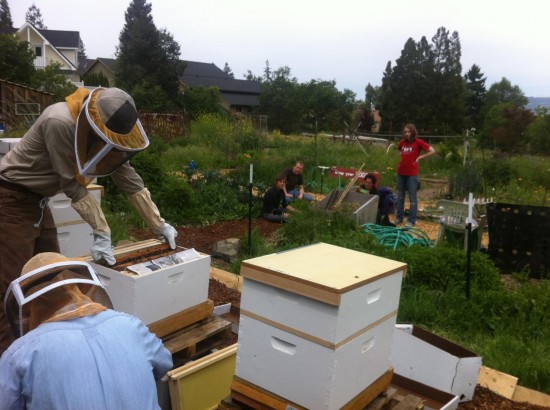 Students at Southern Oregon University installing a beehive at their on-campus garden.

outhern Oregon University in Ashland, OR is a “sweet” place to be. Ryan King, a recent graduate of Southern Oregon’s Master’s of Science in Environmental Education program, has just finished his thesis on apiary-based education, or the practice of utilizing beehives in educational settings. Ryan is a pioneer in the promotion and pedagogy of this field, having been a beekeeper in various schools for the past four years after his undergraduate studies at Oberlin College.

Ryan first got “stung” while he was working at Al Kennedy Alternative High School in Cottage Grove, OR, a school that CLEARING featured in 2010 for its focus on place-based, experiential education. (https://clearingmagazine.org/archives/2368) Ryan’s principal at Kennedy asked him to spearhead a beekeeping project, since he had majored in science during his undergraduate studies and was interested in working with his students outdoors. After just a few months of working with students at the beehive, Ryan began to see the impact that the practice of beekeeping could have on a school community. He saw class attendance rates and student buy-in rise at the school, impacts that he attributed to the opportunity for at-risk students to invest time in hands-on projects. Ryan saw beekeeping as a way to connect students to the science they were learning in the classroom while at the same time giving them valuable skills they could use in the future. He sees his students as future scientists and farmers of America, and what a better way to connect students to current events than by giving them valuable skills to contribute to world problems?

Consequently, Ryan focused his graduate studies on apiary-based education. Over the two years he spent in Ashland, he established a hands-on, multi-age, multi-pronged beekeeping program called the Ashland Apiary Project. In his recent article “Beekeeping as Experiential: The Ashland Apiary Project,” Ryan lays out the educational and environmental goals that emerge from apiary-based education and the outcomes that he has seen manifest from Ashland’s project specifically. (http://www.jsedimensions.org/wordpress/content/beekeeping-as-experiential-the-ashland-apiary-project_2013_05/)

The project starts with training college-aged students from Southern Oregon University, centrally located at the three-hive apiary in the school’s campus garden. These students are mentored in beekeeping skills by local beekeeper Sarah Red-Laird, who runs an educational nonprofit organization in the area called BeeGirl. (http://www.beegirl.org/) Students then take their new skills into the community, teaching high school students through the SOU Beekeeping Club and advocating for pollinator gardens and other sustainable projects at city council meetings. From there, the project reaches elementary school students through summer science camps and educational workshops. This year, Ryan sets out to establish an on-campus apiary in his new teaching position at Ruch Elementary School, a rural K-8 public school in the Applegate Valley.  The apiary will serve as a satellite research site to Southern Oregon University as well as award opportunities for students to host symposia at Ruch and collaborate with local beekeepers and farmers in the community.  Through these many outcomes, Ryan shows us the many benefits that can come from a school apiary project. 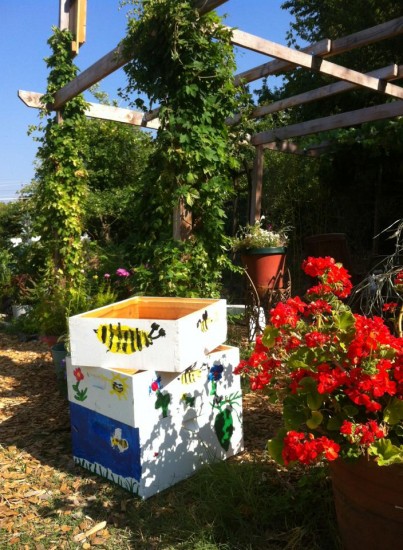 Ryan sees apiary-based education as a complement to the already-existing pedagogical philosophy of place-based education. The “stuffy indoor curriculum” that he observes in schools today is not what kids need. “Kids are bored, kids are penned into curriculum, and they get spit out very unmotivated about where they’ve come from,” he says.

His solution, beekeeping, gives students a local, community perspective to their education and valuable skills for their future. Ryan reminds us that learning from bees, by nature, is localizing, as bees depend on the four miles surrounding their hive for food. Therefore, hands-on projects on campus, like a school beehive, can flatten the school’s walls while at the same time connect students to their local community. Ryan’s colleague, Sarah Red-Laird (BeeGirl) has taken on the lead responsibilities for the Ashland Apiary Project, whose future plans include an expansion to a sustainability and farm center that Southern Oregon University is developing. Here, Sarah would teach college-level classes on beekeeping and develop a full-course program at the university. Stay tuned next, as we visit with her next week!

Katie Boehnlein is a writer/intern for CLEARING magazine and teaching assistant at Catlin Gabel School in Portland, Oregon. She enjoys writing about the endless expressions of place-based education, inspired by so many creative teachers. Katie blogs about her own ecological and urban adventures at “In the Midst,” which can be found at kboehnlein.wordpress.com. 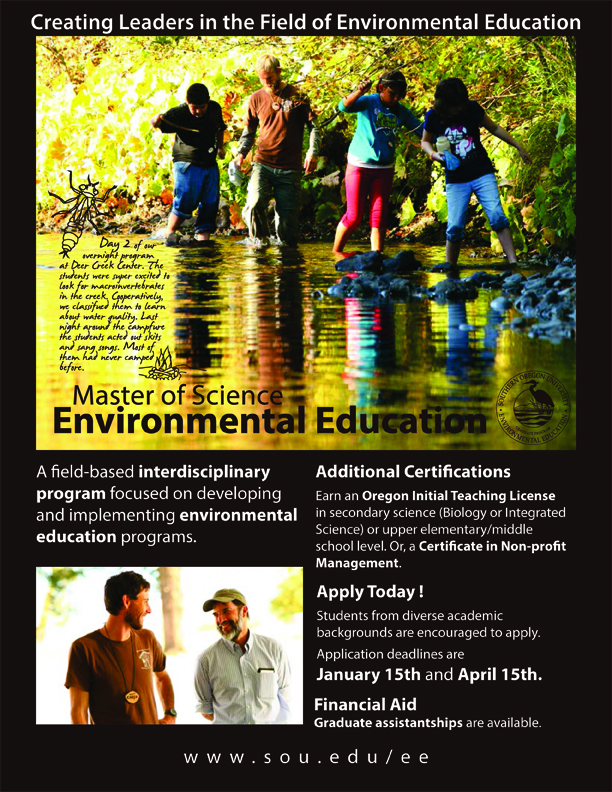