Five years ago, with the addition of new management at Tamarak Nature Center in Maplewood, Minn., programming for children and their families began to take the road less traveled. It began, in effect, to go off trail.

“When Marcie, our new acting outdoor education supervisor, came on board, she asked a question,” said Jody Yungers, director of park services and recreation in Ramsey County, Minn. “If we really wanted our kids to connect with nature, why did we have signs posted that basically were saying don’t touch, don’t engage or really appreciate the outdoors? Marcie started the ball rolling and really worked with us to start the whole notion of asking the important question of how do we connect families with nature.”

An answer followed shortly afterward. One afternoon, while observing the reluctance of young mothers with children to venture beyond the interior of the nature center, Oltman began to realize that the mothers’ unfamiliarity and discomfort with the outdoors might be to blame. Her idea for a solution turned out to be wildly successful. It was also counterintuitive. END_OF_DOCUMENT_TOKEN_TO_BE_REPLACED

The Window into Green

With the new wave of interest in the environment, will we finally give students the tools they need to become environmentally literate citizens?

In just a few weeks, high school seniors all around the United States will walk proudly across stages, hoisting their diplomas as they graduate from formal K–12 education. As their teachers, we’ll look on with some wistfulness, for the world into which they are graduating—one of spiraling financial crises coupled with huge international challenges—is vastly different from the one in which they started their senior year only 10 months ago.

But wait, it gets worse. If you place your finger on the pulse of the planet, this is what you’ll discover: global surface temperatures rising, glaciers melting, oceans warming, sea levels rising, rain forests burning, coral reefs dying, old-growth forests disappearing, deserts spreading, the world’s population increasing, and species vanishing at the highest rates since the extinction of the dinosaurs.

In short, the ecology that underpins our economy is also collapsing. And the solutions to this challenge elude not only most of our graduates, but also us—their teachers, administrators, and parents.

Will our graduates be ready for these new realities? Will they confidently stride into this world as college students, workers, voters, consumers—in short, as competent, caring adults capable of making good decisions on the pressing issues of the day?

END_OF_DOCUMENT_TOKEN_TO_BE_REPLACED 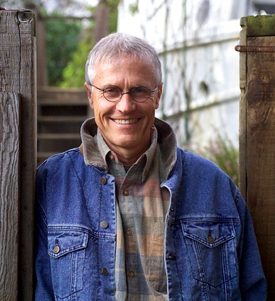 You are Brilliant and the Earth is hiring From a commencement speech given at the University of Portland, May 3, 2009.

When I was invited to give this speech, I was asked if I could give a simple short talk that was “direct, naked, taut, honest, passionate, lean, shivering, startling, and graceful.” No pressure there. Let’s begin with the startling part. Class of 2009: you are going to have to figure out what it means to be a human being on earth at a time when every living system is declining, and the rate of decline is accelerating. Kind of a mind-boggling situation… but not one peer-reviewed paper published in the last thirty years can refute that statement. Basically, civilization needs a new operating system, you are the programmers, and we need it within a few decades.

END_OF_DOCUMENT_TOKEN_TO_BE_REPLACED

“Knowledge of the nearest things should be acquired first, then that of those farther and farther off.” — Comenius, 17th C. educator (Dubel and Sobel, 2008)

On the day of my twenty first birthday, I arrived in the small Appalachian town of Whitesburg, Kentucky (population 2,000) on a university field study. Though not yet a credentialed teacher, I was assigned the position of reading specialist for a small group of unmotivated yet adequately intelligent 5th-7th grade students at Cowan School, about five miles off the main highway.

It took very little time to discover that the traditional methods of schooling were not going to work, the problem exacerbated by my status as a California “outsider”.  At that idealistic age despair was not a consideration; I had no choice but to embrace our differences. Rather than following a rote lesson plan, it seemed more promising to ask them questions about themselves.